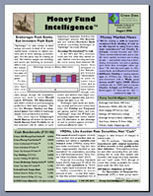 The content page contains archives and delivery settings for all subscriptions.

Crane Data'​s January Money Fund Portfolio Holdings, with data as of Dec. 31, 2022, show that Repo holdings jumped to a record $​2.​94 trillion, while everything else declined and Treasuries continued a 10-​month slide. Money market securities held by Taxable U.​S. money funds (​tracked by Crane Data) increased by $​72.​6 billion to $​5.​039 trillion in December, after decreasing $​24.​6 billion in November, but increasing $​57.​7 billion in October and $​15.​2 billion in September. Repo remained the largest portfolio segment and hit record levels, while Treasuries remained in the No. 2 spot. The Federal Reserve Bank of New York, which surpassed the U.​S. Treasury as the largest "​Issuer" seven months ago, saw RRP issuance held by MMFs jump $​320.​2 billion to a record $​2.​319 trillion. Agencies were the third largest segment, CP remained fourth, ahead of CDs, Other/​Time Deposits and VRDNs. Below, we review our latest Money Fund Portfolio Holdings statistics.

It continues, "​ICI'​s release says, 'Worldwide regulated open-​end fund assets decreased 6.​1% to $​56.​19 trillion at the end of the third quarter of 2022, excluding funds of funds. Worldwide net cash outflow to all funds was $​33 billion in the third quarter, compared with $​146 billion of net outflows in the second quarter of 2022. The Investment Company Institute compiles worldwide regulated open-​end fund statistics on behalf of the International Investment Funds Association (​IIFA), the organization of national fund associations. The collection for the second quarter of 2022 contains statistics from 46 jurisdictions.'"

Our "Top Money Funds" piece states, "This issue recognizes the top performing money funds, ranked by total returns, for calendar year 2022, as well as the top funds for the past 5‐​year and 10‐​year periods. We present the funds below with our annual Money Fund Intelligence Awards. These are given to the No. 1‐​ranked funds based on 1‐​year, 5‐​year and 10‐​year returns, through Dec. 31, 2022, in each of our major fund categories -- Prime Institutional, Government Institutional, Treasury Institutional, Prime Retail, Government Retail, Treasury Retail and Tax‐​Exempt."

MFI also includes the News brief, "Bloomberg on 'Starving for Yield? Check Out Money-​Market Funds.'" It says, "​If you think high-​yield savings accounts offer juicy rates to park some cash, wait until you see what money-​market funds are paying. Yields ... spiked from 0.​02% earlier this year to more than 3.​6% as of early December, according to Crane Data'​s 100 money-​market fund index. After this week’​s rate increase by the Federal Reserve, money-​market fund yields are poised to soar even higher."

Another News brief, "Federated Hermes' Deborah Cunningham Writes, 'Sweet Spot: Cash Should Still Reign.' She says, '​The liquidity industry'​s gain from stock and bond investor pain should continue in 2023. In particular, with yields rising with each Federal Reserve hike, money markets should retain their status as an in-​demand asset class. Money funds in particular should hit a sweet spot even when hikes cease because they are able to invest further out the yield curve to seek higher yields.'"

The December issue of our flagship Money Fund Intelligence newsletter, which will be sent out to subscribers Wednesday morning, features the articles: "Top 10 Stories of 2022: Rising Yields, Reform Reactions, D&​I," which highlights Crane Data'​s biggest News pieces of the past year; "J.​P. Morgan'​s 2023 Outlook: Supply-​Demand Gap Narrows," which reviews the outlook for money markets in the coming year; and, "BlackRock'​s Circle Reserve Fund USDC Stablecoin," which covers the new money market fund used by the USDC stablecoin. We will also send out our MFI XLS spreadsheet Wednesday a.​m., and we'​ve updated our Money Fund Wisdom database with 11/​30/​22 data. Our December Money Fund Portfolio Holdings are scheduled to ship on Friday, Dec. 9, and our December Bond Fund Intelligence is scheduled to go out on Wednesday, Dec. 14. (Note: Our MFI, MFI XLS and Crane Index products are all available to subscribers via our Content center. Note too: Register ASAP for our Money Fund University, Dec. 15-​16 in Boston, Mass, at the Hyatt Regency. Clients are welcome to stop by Crane Data'​s Holiday Cocktail Party at MFU on 12/​15 from 5-​7pm!)

MFI'​s "Top 10 Stories" article says, "​After almost two years of zero interest rates, money fund yields skyrocketed in 2022, rising from 0.​02% to 3.​60% (​Crane 100 MF Index). While this was the biggest story of the year, money funds also spent time discussing the SEC'​s Money Fund Reform Proposal from December 2021. (​We'​re still waiting for the final rules to come out any day now.) Other major themes of the past year included: the pivot of ESG money funds towards Social MMFs, carnage in the stock and bond fund markets and asset outflows from ultra-​shorts, the increase in yields in European and worldwide markets, and the end of fee waivers. Below, we excerpt from a number of our biggest stories to highlight the major trends of 2022."

Our "2023 Outlook" piece states, "J.​P. Morgan published its 'Short-​Term Fixed Income 2023 Outlook' last week, and titled it, 'More supply and higher yields, what'​s not to like?' Authors Teresa Ho, Pankaj Vohra and Holly Cunningham tell us, 'The sharp rise in rates this year was a welcome relief for the US money markets -- markets that were plagued by the Fed'​s zero interest rate policy for at least two years. Even so, it was not all good news, as high inflation and tight labor markets pushed the Fed to embark on one of the most aggressive tightening cycles in modern history. In response, liquidity investors significantly shortened duration at a time when the supply-​and-​demand mismatch in the money markets was substantial.'"

It Continues, "​They say, '[​T]​his pushed short-​dated T-​bills and SOFR to trade meaningfully through RRP.... All told, balances at the Fed'​s ON RRP continued to grow, increasing from $​1.​5tn ... to $​2.​1tn, as investors used the facility as a source of backstop supply, to shorten duration, and/​or to [​support] their yields.'"

Our "Circle Reserves" piece states, "BlackRock recently launched a new Treasury (​and repo) money market fund, Circle Reserve Fund, exclusively for Circle Internet Financial, which offers one of the largest stablecoins, USDC. The fund, with ticker USDXX (​for its Institutional Shares), was launched on November 3, and has already grown to a hefty $​15.​9 billion. It has an expense ratio of 0.​21% (​0.​17% after waivers), a minimum initial investment of $​2 billion, a WAM (​weighted average maturity) of 41 days and a 7-​day yield of 3.​86% (​as of 11/​30). BlackRock is the Manager and Distributor, while BNY Mellon is the Custodian and Accounting Services Provider, according to the fund'​s N-​1A registration filing. USDC is approximately $​43.​9 billion in size, while the largest stablecoin, Tether, is $​65.​9 billion (​though the latter has been decreasing of late)."

MFI writes, "​An article from Coindesk, entitled, 'Circle Begins Putting Reserves Into New BlackRock Fund,' explains, 'Circle Internet Financial has begun moving the reserves for its USDC stablecoin into a dedicated fund set up by BlackRock and registered with the U.​S. Securities and Exchange Commission, the company disclosed.... The Circle Reserve Fund -- a government money market fund managed by BlackRock Advisors -- has been in the works for months after BlackRock initially sought to register it in May. Circle will be its only eligible investor, and the stablecoin issuer has already started putting its reserves there, expecting to be '​fully transitioned' by the end of March.'"

Also, a sidebar, "NY Fed Blog: Deposit Betas," states, "​The Federal Reserve Bank of New York'​s 'Liberty Street Economics' asks, 'How Do Deposit Rates Respond to Monetary Policy?' It tells us, '​When the Federal Open Market Committee (​FOMC) wants to raise the target range for the fed funds rate, it raises the interest on reserve balances (​IORB) paid to banks, the primary credit rate offered to banks, and the award rate paid to participants that in- vest in the overnight reverse repo (​ON RRP) market to keep the fed funds rate within the target range.'"

Crane Data is preparing for its next Money Fund University "basic training" conference in just over 2 weeks! Our 12th annual MFU will change slightly from its previous basics format to a more advanced "Master'​s in Money Markets" program this year. It will take place at the Hyatt Regency in Boston, Mass., December 15-​16, 2022. (​We'​re also hosting Crane Data'​s Holiday Party at MFU on Dec. 15 from 5-​7pm, so please join us!) Crane'​s Money Fund University is designed for those relatively new to the money market fund industry or those in need of a concentrated refresher on a broad core curriculum. The event also focuses on hot topics like money market fund regulations, money fund alternatives, offshore markets, and other recent industry trends. Our educational conference features a faculty of the money fund industry'​s top lawyers, strategists, and portfolio managers, and the Boston show will include an `​extra session on proposed regulations and an extended free training session for Crane Data clients. Money Fund University offers a 2-​day crash course on money market mutual funds, educating attendees on the history of money funds, the Fed, interest rates, ratings, rankings, and money market instruments such as commercial paper, Treasury bills, CDs and repo. We also cover portfolio construction and credit analysis. Registrations ($​750) are now being taken, and the latest agenda is available here. (E-​mail us to request the latest brochure.) Also, join us for our next Bond Fund Symposium, which be held in Boston, Mass., on March 23-​24, 2023. Bond Fund Symposium is the only conference devoted entirely to bond mutual funds, bringing together bond fund managers, marketers, and professionals with fixed-​income issuers, investors and service providers. The majority of the content is aimed at the growing ultra-​short and conservative ultra-​short bond fund marketplace. Finally, mark your calendars too for our next big show, Crane'​s Money Fund Symposium, which will be held in Atlanta, Ga., June 21-​23, 2023. Money Fund Symposium attracts money fund managers, marketers and servicers, cash investors, money market securities dealers, issuers, and regulators for 2 1/​2 days of sessions, socializing and networking. Let us know if you'​d like more details on any of our events, and we hope to see you in Boston next month or in March 2023, or in Atlanta in June 2023.